Excel Tip > Excel Functions > Statistical Functions in Excel > How to use VAR.S function in Excel

How to use VAR.S function in Excel 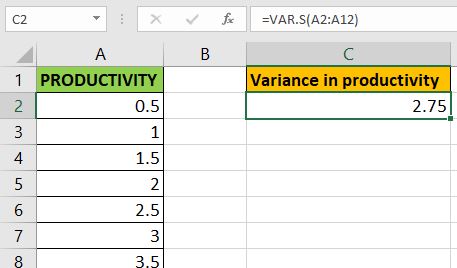 Variance is used to know how much a data vary from mean of data. Mathematically, variance is an average of squared mean difference. Standard deviation is squire root of Variance.

Number1, number2,...: these are the numbers of which you want to calculate variance.
The first number is compulsory.
Notes: VAR.S ignores blank and non numeric values, including boolean values.
The first argument in is compulsory, rest are optional.
These numbers can be supplied as individual numbers, cell references, ranges or arrays to VAR.S function.
All below formulas are valid VAR.S formulas.

Example of VAR.S Function
We have this data of productivity of employees in an organization. Assuming that this is the entire population, we need to calculate the variance of data.

To calculate the variance of entire population, use this VAR.S Formula.

This will return the variance in data, which 2.75. This VAR.S function reduces a lot of effort and saves time.

If we calculate the square root of this data, we will get the standard deviation, which will be about 1.7.

What is the Difference in VAR, VARS, VAR.S (all are same) and VARP or VAR.P?

The denominator in VAR, VARS,VAR.S is n-1. Where n is the number of observations. Where VAR.P has denominator n.

This was a quick article about the VAR.S function of excel. I hope this was helpful. If you have any doubts regarding this or any other excel function, feel free to ask. I am here to answer all the queries.

How to use the STDEV.P function in Excel : Calculate the standard deviation  for the population data numbers in excel using the VAR.P function

Regressions Analysis in Excel : Regression is an Analysis Tool, which we use for analyzing large amounts of data and making forecasts and predictions in Microsoft Excel.

How to Create Standard Deviation Graph : The standard deviation tells how much the data is clustered around the mean of the data.

50 Excel Shortcuts to Increase Your Productivity | Get faster at your task. These 50 shortcuts will make you work even faster on Excel.

The VLOOKUP Function in Excel | This is one of the most used and popular functions of excel that is used to lookup value from different ranges and sheets.

COUNTIF in Excel 2016 | Count values with conditions using this amazing function. You don't need to filter your data to count specific values. Countif function is essential to prepare your dashboard.

How to Use SUMIF Function in Excel | This is another dashboard essential function. This helps you sum up values on specific conditions.